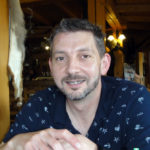 My main production comprises mainly Edo style fittings. Although within years of study I still more and more appreciate pre-Edo period fittings. They represent samurai warriors culture and aesthetic in its pureness. Later eras diluted this pureness influenced of change of lifestyle and real duty content based on development of social structure and domestic policy changes.

The first metalworking attempts are dated back to 2011. At the beginning I visited a few workshops around the world but rest of the time I am a self-learner in terms of metalwork techniques.

Since 2013 I have started to make sword fittings as a full time job.

In 2016 I found my mentor in Japan who has guided my further steps through  world of Japanese sword, sword fittings and helps me with perceiving of Japanese aestehtic.